Bunny Boiler Gold Is An Online Board Game - Played On Ones Own!

The original instant game called Bunny Boiler was rated one of the top games in online casino history, however it has now just got better. Introducing Bunny Boiler Gold, the brand new edition!

One of the things older players may notice is that the sound effects and animations of the game are considerably better with Bunny Boiler Gold than with its predecessor.

One of the appealing aspects of the game is the fact it's pretty cute so it automatically attracts female players, however not so cute that it drives the guys away, who fancy a nice online win!

The game follows the adventures of a little young rabbit making his way through an underground tunnel complete with lights of various colors. The object of the game and the bunny's goal is to reach his hollow, and collect the jackpot prize situated in the board's center, whilst avoiding capture and being thrown in the stewpot.

A virtual six sided die is rolled and the bunny hops through the tunnel the number of times that correspond with the die. With a 1,000 time multiplier, places he can land on along the way to his prize include the safety "Carrott" space, the Colorful "Jump" space allowing a super leap forward, and the instant annihilator space the "Crossbones."

The Bunny Boiler Gold Game is definitely different than playing a regular slot game. It has more resemblance to a board game. When was the last time anyone played one of those on their own and actually got to win money!

Try it today for free and see how hopping like a bunny can earn some nifty prizes along the way. It's definitely a great way to inject some game play with a difference. They say a change is as good as a rest, who cannot agree! 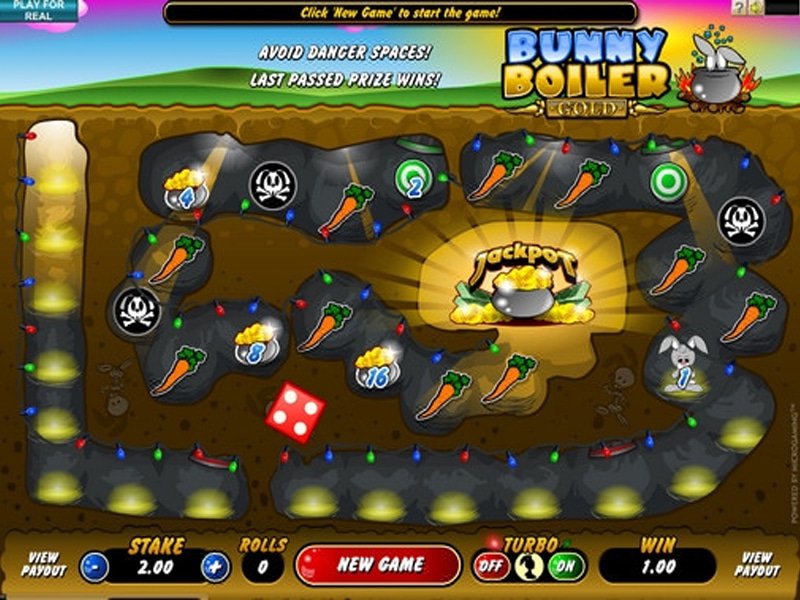